@KrunchTime: I'll compile it over the weekend and test it on one of my boxes. Worked, since Corenominal resigned, a bit on an own continuation, just for me with my own theme, new python tools, etc .... I'm digging every day a bit deeper ... and of cause keep an eye on Bunsen

I'm curious, when the first ISO show's up

OpenBox ist still actively in development. Actually, there is version 3.6 since the 3rd of march with the following changelog:
3.6:
* Added various new abilities to If action, including the <query> tag,
matching class, name, role and window type.
* Added ForEach action.
* Restore the <center> option for window placement.
* New GrowToFill action.
* Updated Portuguese and Polish translations.
* New Galician translation.
* Added strict option to ToggleShowDesktop action.
* Speed optimization in rendering code.
* New <position> tag for ShowMenu action allows placing menus other
than at the mouse cursor.
* Fix some corner cases of relative position to work correctly.
* Allow specifying multiple mousebinds in one tag as we already do
for keybinds (separated by spaces, as "W-Return M-S-F3" for example).
* Added option rebindOnMappingNotify option, on by default, which
controls if we update binds when the keyboard layout changes at runtime.
* The resize action now only considers the part of the client that is onscreen
for purposes of picking an action to perform.
* Make desktop actions non-interactive (means you can have more actions bound
to a key after them, and the dialog disappears on a timer instead of when
releasing the modifier keys).
* obxprop is now not pathologically slow when printing very long arrays.
* Fix menu accelerator underlines sometimes not showing up.
* Fix so you can click menu entries before the menuHideDelay expires if it's
a new click.
* Don't read the X event fd to the poll set every time we reconfigure.
* Fix some specialized button bitmaps not loading from the correct files.
(toggled + pressed or hover would just be the base toggled image).
* Various small bugfixes.

So I guess, eventually there will be a wayland compatible version.

I guess it was worth the effort ...

I switched after a long time from black-white to a more colourful layout ... took me a few hours to build it, but it's ready at last ^.^

How about the name CB (or if that is too short CoreBox)?

Anyway. When I think, about what Philip did, does anyone here know, how to build an ISO with live- and install-mode, including the complete debian setup (the encryption part is simply brilliant), how to change the branding, include own branded and favoured packages - and last but not least, include the nice keyboard switcher in the live mode?
Also a wiki page for how to do that would be nice

thank you for keeping up that long running #!, thank you for all the hard work you did, and thank you for not closing this forum, now that you go on and do some other great things!

Have fun, doing, whatever comes to your head,

This is my actual solarized dwm. Keeps me happy while hacking

Welcome to the show and ein herzliches Willkommen!

How the hell did you stumble upon the chinese cartoon imageboard for americans? O.o

I use a Panasonic CF-19 as my main machine, which has a touch screen and is convertible to become a tablet instead of a notebook. Today I was so lazy and wanted to use it the first time as a kind of ebook reader and wanted to use the touch input for scrolling the book. Bingo - the input wasn't rotated. I used to write four little scripts and added four keyboard mappings to openbox rc.xml script.

I read in the forum, that (a long time ago) someone was on the search for the same solution, so for anyone searching next, here are the scripts ...

I got the name of the touch input screen via xinput list.

I added the four scripts as key combinations in the rc.xml of openbox:

As a last addition, I added a line to my openbox autostart, to calibrate the touch screen on every start:

To know the correct calibration, you need to use the tool xinput_calibrate.

Another machine for happy coding ...

Comments: Everything but the fingerprint reader works, HDMI not tested

Why not use the features of YouTube?
Setup your browser to use HTML5 instead of Flash

I like the community and the colors of this forum. There is a reason, I run Crunchbang since years. Let's stay together here! O:)

Did you setup your ASUS keyboard via

The test for ssh generates only a mask, that is used in the later case at this positions in the strings: ${prompt_is_ssh}

The case (ending with esac) tests if the user is in the root group. If so, he/she uses the prompt, presented under root) , but if not, the everything else slot *) will use the other prompt.
In other words, if your account is root, use the root) branch, otherwise use the *) branch.

If you're going to use the elite2 prompt, you'll of cause lose those information. Your only chance is to read the source for the elite2 prompt or rebuild it yourself ( elite 2 prompt source )

Oops, I forgot another ebook-reader, ebook-speaker. It let's you hear the book via a synthetic voice - and it works for all languages, espeaker supports.

@shengchieh: If you want to write epubs, Emacs might be of help for you.

You can use fbreader to read epubs natively, or install calibre, a software to collect, convert and read all kinds of book files.

That's why I spoke about the firmware file ( source: http://www.debian.org/CD/faq/ ).
Like in any other Debian distro, closed source blob's aren't included by default within installation medias (and most often they aren't needed, btw).

You enabled the "secure" erase of the complete harddisk (which actually also writes a random pattern on the disk. Doing that, takes based on you're machine and the hard disk size hours up to a whole day ^.^
This step is needed, so that it is not possible to see, that only a part of you're hard disk is encrypted. Otherwise - for a possible attacker that got you're machine in his hands, it's "easier" to decide where/how many informations are on you're disk.
Hopefuly you're chosen a very long key and a good setup for the encryption - to not get the result shown here: http://security.stackexchange.com/quest … nd-low-ram

You just have to download the firmware for you're #! (Waldorf = wheezy / Statler = squeeze) from here
http://cdimage.debian.org/cdimage/unoff … /firmware/
expand it into a folder /firmware on you're installation medium (or a separate usb stick you mount to an usb port while installing) - and #! (like any Debian ISO or Debian derivate ISO) find's the needed firmware for you're hardware.

The problems with Athlon XP2200+ are reported since June 2005 - and not only for Debian
http://www.linuxquestions.org/questions … or-328711/
http://www.linux-archive.org/ubuntu-use … -freq.html
... so you aren't alone.
You could boot from another image, maybe Waldorf, Grml or a Debian Live ISO - and take a look at your /var/log/kern.log & /var/log/pm-powersave.log on the harddisk - maybe the logs have the answer for you, why you're Athlon is working in the very slow mode?

Of cause this doesn't work, there is no UBUNTU Wheezy, Wheezy is from Debian.
Have a look at http://ppa.launchpad.net/voria/ppa/ubuntu/dists/ - then you see the possible options to use. I'd try precise or quantal .. instead of wheezy in the repo.
But, there is no guarantee, it would run with #!

The medias from the 27th (like the ones from the 24th) have two very serious bugs.

This bug starts at the moment, when you press the two shift buttons to change the keyboard layout. What you don't see on the first view is - you nave have TWO graphical desktops!
On CTRL+ALT+7 is the original Crunchbang Desktop, still with US as keyboard layout and correct user rights, but on CTRL+ALT+8 - where the user with, let's say the german keyboard is, you have no user rights at all. You can't connect to another USB stick, mount your harddisk or setup WIFI / LAN to access the internet.
But if you (in my case accidently) switch to CTRL+ALT+7, voila - wrong keyboard (and so impossible in my case to setup my WLAN, because the needed keys for the password are unreachable), but the user rights are now working, so I had this time the chance to post screenshots of my misluck (from the last days ... I didn't found out, there was still the CTRL+ALT+7 desktop, where I could save screenshots, reach a terminal, etc.

2. Bug - and this one is much more serious
I have (and had) setup my laptop with a luks partition, so 256 MB for /boot - and the rest as a luks4 encrypted ext4 partition.
If you start the install mode, and access this partition ... the installer doesn't find the ext4 partition in the luks container, but even better, you didn't say yet anything to to with the partition, but the container is already not accessible anymore.
If just in that moment you stop installation, reboot (and still think, you're normal system is there, like it is with other live distors) ... you will feel helpless, because you're system is gone. The luks container is broken.
I tried the same with the actual debian livesystem ... and ... it didn't happen.
Whatever, setup again my system with the version from the 30th of april, updated everything - and got back my 140 GB backup, so I can post about this two bugs.

Sorry, for the long time, but I was searching the last days, what went wrong.

Here are my screenshots ... 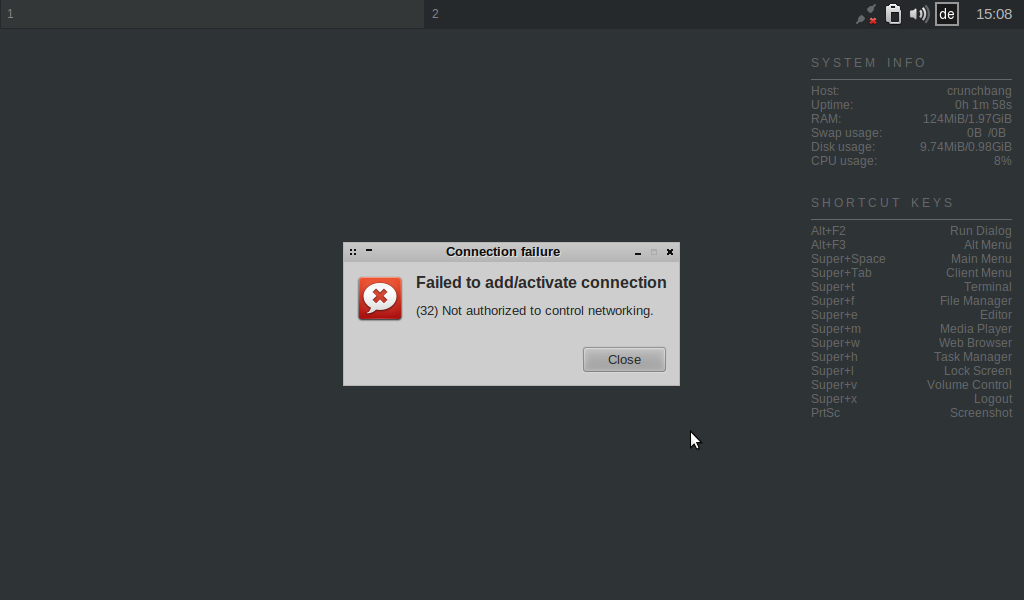 This first one shows the CTRL+ALT+8 virtual graphic terminal

... and I just see, that the other screenshots aren't on the USB stick, even not after the system showed, it wrote them to the stick v.v

Anyway, Corenominal, I like Crunchbang and I guess, in you're next medias this bugs are gone ^.^

Please keep up you're good work!

I just tried the live mode of the i686 version of the new iso and ran into the situation, that some things aren't allowed, like clicking on a network connection to activate it, or clicking in thunar on a separate partition icon.